An accident is rarely ever just an accident 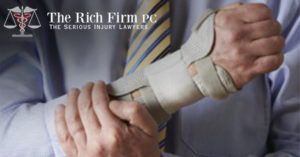 Every 3 minutes, someone in the U.S. dies from an accidental injury. That’s nearly 200,000 people every single year.

Injury is the leading cause of death among Americans aged 1 – 44, according to the Centers for Disease Control and Prevention (CDC). Personal injuries are responsible for 60 percent of all deaths in this age group, more than infectious and noncommunicable diseases combined.

Millions more who survive their injuries are subjected to the long term damage to their physical and psychological wellness… and their financial stability.

The CDC estimates that around 3 million people are hospitalized for their injuries annually, with another 27 million requiring emergency room treatment.

In the D.C. area, there is a rate of 53.7 injury-related deaths per 100,000 residents, while in Maryland the rate is 56.1 per 100,000. This was revealed in a recent study entitled The Facts Hurt: A State-By-State Injury Prevention Policy Report from Trust for America’s Health (TFAH) and the Robert Wood Johnson Foundation (RWJF).

While these rates are marginally lower than the national average of 58.4, a different picture arises upon closer examination of more detailed data.

For instance, since 2010, the number of injuries related to traffic accidents throughout D.C. has been on the rise, with accidents increasing 13 percent in just one year from 2014 to 2015. These traffic accidents caused almost 2,000 serious injuries, according to the District of Columbia Traffic Safety Office.

Those who were seriously injured include drivers and occupants of vehicles, motorcyclists and pedestrians. This last group, pedestrians, accounts for a frightening 46 percent of all traffic fatalities from 2010 to 2014.

In other words, people who were innocently walking or bicycling in Washington D.C. were the most likely to be killed by traffic accidents. The District of Columbia also ranks 21st for drug overdoses in the nation, according to the same state-by-state injury report. Drug overdoses are the leading cause of accidental death in D.C. and 36 other states across the country.

Maryland also has some concerning injury rates. Overall, injuries send close to 500,000 Maryland residents to the emergency room, about 60,000 more are admitted to the hospital and around 3,400 die every year.Personal Injury in D.C. and Maryland – What the Numbers Say.

These numbers are thanks to a joint report released by the Maryland Department of Health and Mental Hygiene, the Prevention and Health Promotion Administration and the Environmental Health Bureau.

The top reasons for these injuries were falls, being struck by an object and motor vehicle accidents. At the top the list, falls cause around 23,000 emergency room visits, 14,000 hospitalizations and close to 450 deaths across Maryland.

Injuries at work are a big problem for residents, as well. Over 68,000 new cases of workplace injuries occurred in 2014 alone, according to the Survey of Occupational Injuries and Illnesses (SOII). This means that around 3 out of every 100 full time workers in Maryland were hurt on the job.

These injuries have equally concerning financial implications. A study by John Hopkins Center for Injury Research and calculated that in Maryland, the average cost for a 5 day hospitalization after a fall is an incredible $13,200.

Every year, all injured Maryland residents pay around $200 million in emergency department fees and $835 million in hospitalization charges throughout the state.

The U.S. Agency for Healthcare Research and Quality reports that just entering the emergency room will cost an average of $1,500 – this is before expenses associated with diagnostic care and treatment. A ride in an ambulance alone can result in a bill over a thousand dollars.

On a both a statewide and national scale, preventable injuries are a national health crisis. The dangers are not just at work or on the road, but in our own homes.

Consistent with studies showing the risk of fall injuries across the country, around 3 million Americans were hurt on stairs, landings, ramps and floors.

The truth is, when you consider the circumstances around so many of these injuries, it is clear that an accident is rarely ever just that.

Falls are preventable if hazards are removed or if walkways and stairways are better maintained. The same is true of being hurt by some unstable or badly placed object.

Motor vehicle accidents are undoubtedly the most prime example of human error. When it comes to the dangers of consumer products, even household staples like toys, the fault is with the manufacturer.

This is why if you have been injured, it is so important to speak with a personal injury lawyer. Explain the circumstances of your injury to a legal professional. Only they have the expertise to know if you have a case.

The Rich Firm has already recovered millions for victims just like you. In just one of their more recent personal injury cases, the Rich Firm recovered $1.25 million settlement for a client who was hurt due to negligence.

Their legal team demands accountability from negligent parties – whether they are employers, businesses, drivers or individuals.

If you or a loved one suffered a personal injury in Maryland, Washington D.C. or Virginia, call The Rich Firm for your free consultation today.

Do you know what if you don’t notice immediately that you have been the victim of medical malpractice? : https://richinjuryfirm.com/what-if-i-have-been-the-victim-of-medical-malpractice/