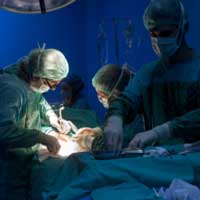 As an alternative to a vaginal delivery, a Caesarean section delivery is frequently scheduled in advance of the due date, as a result of a medical indication, or, less frequently, for the convenience of the mother. The Caesarean section is a surgical procedure, and a risk/benefit calculation based upon medical evidence is the basis for the usual decision to schedule the procedure.

Some indications include previous delivery by Caesarean section, serious bloodborne infection in the mother, which could be transmitted to the child during a vaginal birth, or even a chronic maternal medical condition, which might result in harm to the mother while undergoing the physical stress of a natural delivery.

Malpresentation, or breech position, late in the pregnancy often results in Caesarean section to forestall any complications. If the fetus has an intrauterine anomaly or disorder, including hydrocephalus (excess fluid around the brain) or any other significant problem detected before birth, a Caesarean section may be performed for the health of the infant. In these instances, the procedure is planned several weeks prior to the estimated date of confinement, or due date.

Problems may arise when complications occur during labor or delivery, and at these moments, the physician must be prepared to operate quickly. Specific situations that are problematic include failure to progress in labor, whether due to difficulty resulting from the size of the baby’s head in relationship to the birth canal, or to fetal distress indicated by heart rate changes on electronic fetal monitoring used in the labor and delivery suite.

These changes are sometimes the result of fetal hypoxia, and if the fetus is not receiving an adequate supply of oxygen, every moment counts. Delivery must be rapidly undertaken.

Another situation in which delivery must be quickly performed occurs due to a condition called placental abruption. The placenta will detach from the uterus before labor, and the mother can quickly exsanguinate, or bleed out. The child will not survive because of lack of oxygen carrying blood from the placenta. This is a true obstetrical emergency.

Another condition that may necessitate Caesarean section is know as placenta previa, and is usually characterized by painless bleeding in the second or third trimester of pregnancy. In placenta previa, the placenta, a fleshy, disc shaped organ that provides nutrients and oxygen carrying blood to the fetus, covers the opening of the mother’s cervix (cervical os). While this condition is less life-threatening than placental abruption, problems occur during delivery, and bleeding may be significant.

Unexpected and unpredictable problems that prevent deliver include shoulder dystocia, a condition in which the should of the infant becomes trapped behind the maternal pubic bone, preventing a timely delivery and potentially compressing the umbilical cord, cutting off the flow of oxygen to the fetus. Our cells dies quickly without oxygen, and the result of failure to execute a rapid Caesarean section is frequently devastating brain injury or death of the fetus.

Finally, if there is prolapse or any compromise of the umbilical cord that cannot be easily resolved, the delivery must be undertaken immediately, again because of the compromise due to lack of oxygen.

Problems may arise when healthcare personnel fail to monitor the fetus, missing signs of distress, or when the labor is allowed to continue too long. A physician may miss the signs of distress, because of either ignorance or negligence.

Possibly, the obstetrician may have failed to recognize a medical condition in the mother that will be an indication for a Caesarean section. Other mundane but unfortunate reasons for delay of a Caesarean section include poor staffing and problems with insurance that delay appropriate care., resulting in a tragic death of mother or child, or in a lifelong disability such as cerebral palsy or Erb’s palsy (an injury to the nerves that supply the upper arm as a result of shoulder dystocia.)

There are clear standards of care in this area, and if a physician falls short, he or she is negligent. If you have suffered injury personally or to your child, you potentially face years of special medical care and disability. An experienced attorney will be able to help you achieve compensation for these losses and expenses, in the event that negligence was a factor. A consultation with one of the birth injury attorneys at The Rich Firm, PC may help you assess your options.